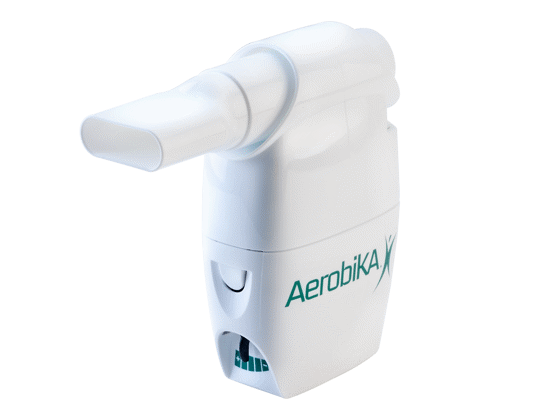 in stock
Included by default: 1x Aerobika device
€ 99
in stock
3 others are viewing this product

DETAILS
Instruction for Use

What is an AeroBika OPEP?

The Aerobika* device can assist with opening weak or collapsed airways and can help to thin and loosen mucus, enabling it to move to the larger airways of your lungs, where it can be coughed out.

Help to manage acute flare-ups of COPD. When you breathe out through the device, you feel rapid vibrations in your airways caused by the resistance of the device. The vibrations open up the airways, while the difficult-to-cough-up mucus lining the airways thins and loosens. The vibrations help to move the mucus into larger airways, where it can be more easily coughed up and removed.

In what conditions is it recommended?

It is excellent for all conditions caused or aggravated by sputum build-up in the airways.

What are the benefits of using an AeroBika OPEP?

The mucus, which blocks the airways, is easier to cough up and empty

What causes the excessive mucus production in the lungs?

Several processes work in concert to increase the production of mucus and prevent it from being expelled. Repeated lung infections (e.g. pneumonia or bronchitis) reduce the elasticity of the lungs, so that the airways collapse at the end of exhalation or do not open up in response to the inflow of air. The blocked airways collect mucus and the air that is sucked in becomes trapped behind the blockage. Air exchange is stopped in these areas and infections develop here again and again, causing flare-ups. Breathing difficulties increase and can eventually become so severe that even the simplest daily activity is hindered.

Why can't the lung get rid of all the mucus?

The cilia in the mucous membranes of the lungs carry the sputum to the larger airways, where it can be coughed up and removed. In bronchitis, the production of saliva is so intense that the lungs cannot keep up with the increasing amount. Over time, the mucus builds up and thickens. It forms a thick and sticky layer in the lungs that cilia can no longer remove, so they need help. Aerobika OPEP helps the lungs to naturally self-cleanse, helping to thin and loosen the mucus layer, allowing it to be released into the large airways where it can be coughed up and expelled.

The use of the AeroBika OPEP

If you notice an increase in COPD symptoms, use the machine 2-3 times a day for 10-10 minutes.

When COPD symptoms are at rest, once daily use is recommended for prevention.

The device is easy to use

Hints for using the AeroBika OPEP

This international award is given to devices that represent innovative technology in life-saving, disease management and bring technical innovation to problems that could not be solved before. It is one of the highest honours in the medical device industry.

The New York awards celebrated the achievements of medical device manufacturers. They highlighted how increasingly advanced devices are helping to improve patient health and enhance the effectiveness of medical treatments.

The drug-free Aerobika OPEP device is effective in helping to prevent COPD flare-ups and relieve symptoms in the acute phase.

Medical studies have shown that the use of aerobics equipment has reduced the likelihood of hospital admission by 30% and has also significantly reduced the need for medication.

Those using the equipment needed fewer antibiotics and steroids than control groups.

In addition, there were significant improvements in respiratory function scores, breathing and patient well-being.