BEMER Classic: a complete set for the home. Handles two instruments at the same time, with the same program. 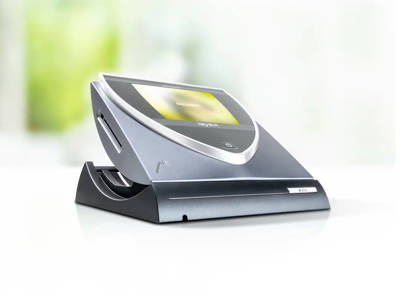 The term BEMER stands for a medical device and treatment that is still unique today.

BEMER is an acronym for Bio-Electro-Magnetic-Energy-Regulation. The device works on the principle of pulsed electromagnetic field (PEMF). You might think. Then it's a magnetotherapy device!

Although BEMER and medical magnetotherapy devices both use magnetic field therapy, they are not the same! Especially not in their effects!

Medical magnetotherapy devices operate over a wide frequency range (usually 1-200Hz), with regular pulses (sine or square waves) and magnetic field strengths of 0.1-1000 Gauss. Their primary effect is on bones and ligaments, although they also improve blood circulation to a small extent.

The magnetic field strength used by BEMER is a fraction of that of medical PEMFs (less than 1 Gauss). The pulse uses a special, patented waveform. The effect is crucially to improve blood circulation in small blood vessels (microcirculation) and the elastic vasomotion of blood vessels (vasomotion).

It is also true that there are conditions where medical magnetotherapy devices are a better choice than BEMER.

What is BEMER recommended for?

BEMER represents a separate group of physical therapy treatments: physical vascular therapy. Note this term because BEMER treatment is unique in this category.

Other devices, while they may have a microcirculatory effect, do not come close to the BEMER effect.

The pulses emitted by BEMER are able to target and specifically affect smaller blood vessels or parts of the vascular system. They have a particularly strong effect where microcirculation is already limited.

All the beneficial effects of the device come from improving microcirculation.

The role of microcirculation

Where microcirculation is not working properly, cellular metabolism is impaired. Vital substances cannot reach the cell. Think of it like your car. If you can't get gas to the engine, it stops running and you don't move.

If the cell doesn't get "fuel", oxygen, the mitochondria in the cell shut down. Their function is to, for example, produce energy and replace dead cells, repair damaged cells, replace and renew tissues, etc.

The worse the microcirculation, the slower the regeneration, the less the body's ability to heal itself and defend itself against pathogens.

The consequences of poor circulation can be seen in many areas.

Bemer is good for all conditions that depend on microcirculation

Can help with healing in hundreds of diseases and conditions. This follows directly from the effects of improved blood circulation listed above.

The effects of BEMER treatment will be felt most strongly by those with already limited circulation and poor general health.

If you are healthy and have no circulation problems, BEMER treatment will not "make" you circulate any better than you should. It won't change superman-woman! It can, however, help with other goals such as enhancing athletic performance, improving physical-mental performance and of course disease prevention.

The BEMER pulse itself is NOT a cure! It "only" starts processes in the body which, day by day, become more and more effective.

No miracle can be expected from a single treatment.

BEMER is a persistent, cure-all treatment. The effect should only be evaluated after at least 30 days of daily treatment. A BEMER treatment lasts 8 minutes and should be given once or twice a day.

The worse the general condition, the more attention should be paid to the intensity of the treatment. Start with the lowest intensity and increase the intensity every few days.

The starting condition and the treatment goal are different for healthy people and athletes, so the first treatment sessions can be performed at a higher intensity.

A common mistake when using BEMER is to exceed the recommended treatment time (significantly) and to immediately set the intensity to maximum. Gradualness is important when using BEMER treatment. The effects of a sudden excessively long and high intensity can include discomfort, headaches, tremors.

BEMER is now a recognised medical therapy. An increasing number of hospitals are equipped with the device.

When not to use it?

According to the present position, there may be absolute and relative contraindications to the use of BEMER.

An absolute contraindication is if the patient is undergoing immunosuppressive therapy. Such as after organ transplantation, bone marrow or stem cell transplantation.

Another group of active medical implants, such as pacemakers, defibrillators, brain stimulators, muscle stimulators, are a contraindication. The use of the BEMER therapy system may lead to malfunctions in these devices.

The immune system is weakened in the treatment of some diseases, such as autoimmune and dermatological diseases. However, for these conditions, the use of BEMER is NOT contraindicated!

The risks of BEMER therapy must be assessed and approved by the treating physician.